Sara
Leave a Comment on Are Witches Real? What It Means to be a Modern-Day Witch

If you’re asking “are witches real?” while conjuring images of Hermione Granger, the Charmed Ones, the Sanderson sisters, or Elphaba, then no. Witches aren’t out eating children, stealing shoes, and performing magic at the snap of their fingers.

But witchcraft is alive and well. It’s hard to pinpoint exact characteristics because it’s a largely individual practice that varies per witch, but many use some or all of these elements in their craft:

Witches tend to fall into specific categories based on their predominant rituals and which natural elements speak to them. For example, some witches focus on herbs and plants to use in their cooking, while others focus on astrology.

This list does not encompass every single type of witch, but it breaks down the main ones:

Elemental | Strong connection to the Earth and all of the elements

Green | Strong connection to the forests and plant life

Hearth | Also known as a cottage or kitchen witch

Hedge | Works with the spirit realm and astral plane, deeply connected to ancestors

Lunar | Strong connection to the moon and its phases

Are All Witches Pagans?

Witchcraft is a practice, not a religion, which means it can be tailored to the individual witch’s spiritual or religious beliefs. Witches can be Pagan, Wiccan, Christian, Jewish, Muslim, Hindu, Buddhist, or any other religion. Witches can also be agnostic / atheists and tailor their ceremonies to connecting spiritually with the earth without worshiping a deity in the process.

The difference between witchcraft and paganism is the religious aspect. The word pagan comes from the Latin word pāgānus, which stemmed from pāgus, meaning a “village or rural district.” From the perspective of the Christian church, “pagan” meant a civilian who was not a soldier of Christ — a worshiper of false gods.

But witchcraft in and of itself is not a religion — it was simply a part of pagan religious ceremonies and practices, just as it can be a part of Christian rituals if a witch chooses to direct his or her witchcraft toward the Christian god, or the Wiccan god and goddess, or any other belief.

Are All Witches Wiccan?

Wicca, also sometimes referred to as Pagan Witchcraft, is a modern pagan religion. Wiccans are usually duotheistic and worship two deities — the God and the Goddess.

Wiccan witchcraft is a specific facet of witchcraft, but it isn’t all-encompassing. There are many witches who do not identify with the Wiccan religion.

Do Witches Worship the Devil?

Most do not. But again, as noted above, witchcraft is a practice that can be tailored to fit the witch’s beliefs. A witch may honor any spirit or deity, or none at all. That can include the devil.

Can Men be Witches?

While witchcraft is commonly associated with femininity, there are male witches, too. Men who practice witchcraft often find themselves battling social stigmas associated with the assumption that witches are only women, but there have been strides made for acceptance for all genders within the community.

This has been a hot debate for a while. Some male witches prefer the term “wizard” or “warlock,” but the majority of men who practice witchcraft are content with be being called witches despite the cultural femininity associated with the word.

Witchcraft is all about honoring the earth and nature’s cycles while incorporating one’s own spirituality into the rituals. It transcends gender. Anyone — literally anyone — cis, nonbinary, LGBTQ+ — any gender, can be a witch. 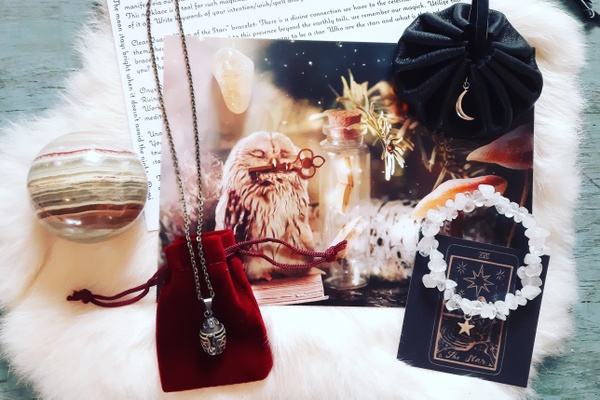 Monthly subscription boxes are a great way to start developing your craft! They can provide tools, jewelry, art, books, and instructions (not to mention how much fun it is to receive each box as a treat to yourself). Check out my top picks for witchy subscription boxes.

Think of spellcasting and hexing more like setting personal intentions and working with the energy of the universe to manifest certain desires and outcomes.

Another way of looking at it is someone sending positive thoughts and prayers or wishing bad karma on someone who deserves to be taught a lesson.

Some witches rely on the “rule of threes,” which is the belief that ill-intentioned magic will return to you three times as a curse. According to Wicca: “Three times what thou givest returns to thee.” The rule of threes can also be applied to positive magic as well.

Candle spells are rituals in which a witch will write down his or her intentions on a piece of paper; anoint the candle with carvings, essential oils, herbs, or other decorations; focus on the desired outcome (usually to attract or banish something), and burn the paper in a ritual while sending those intentions out into the universe. The smoke is a symbolic way to visualize abstract concepts such as goals, emotions, intentions, and desires becoming tangible and being released.

Is the Pentagram a Symbol of Evil?

The pentagram, even though it’s a commonly used symbol among witches, pagans, and Wiccans, actually originated in ancient Mesopotamia circa 3500 BC. For the Sumerians, the pentagram represented both the human form (head, arms, and legs) as well as the elements (spirit, water, fire, earth, and air).

Other societies have also used the pentagram as a powerful spiritual symbol used for protection. For early Christians, the pentagram symbolized the star of Bethlehem and also represented Christ’s five wounds (crown, hands, and feet).

Throughout thousands of years of human history, the pentagram has been a sacred symbol with no ties to evil. We can thank Hollywood for the modern-day connection between pentagrams and Satan-worshipping even though there were no previous ties before the 20th century.

The Church of Satan adopted the inverted pentagram as their logo (but for perspective, the church wasn’t founded until 1966).

Do All Witches Belong to a Coven?

This question depends on who you ask. Some witches insist that in order to be a “proper” witch, you must have a coven. (A coven is a group of witches who meet regularly and partake in rituals and experiences together.)

But that isn’t a belief that’s shared on this site. Solitary witches are perfectly acceptable and welcome to explore the craft on their own terms and time. There are also online communities for witches to join if they need support, advice, or general information.

So… are witches real?

Yes, we are, and there are probably more of us out there than you might realize!

Did I miss anything? Please let me know about your beliefs and rituals in the comments, and I’ll be happy to make any necessary updates to this article to make sure it’s relevant and up-to-date!

**This is an inclusive website for anyone interested in witchcraft, nature, and spirituality. All comments are approved by the moderator before they are published. Hateful, irrelevant comments will not be permitted. No trolls allowed. Please, just be kind. We’re all humans trying to learn and understand one another.**

What is a Strawberry Moon? The June Full Moon’s Name & Meaning

What is a Snow Moon? The February Full Moon’s Name & Meaning